©
Plan created by another user. Make it yours

On the 1st (Sat), don't miss a visit to Potemkin Stairs, don't miss a visit to Deribasovskaya Street, observe the fascinating underwater world at Nemo Odessa Dolphinarium, then examine the collection at Museum of Interesting Science, and finally get outside with Beach Golden Shore. On your second day here, head outdoors with Central City Beach, Head underground at Catacombs of Odessa, then see the interesting displays at Secrets of Underground Odessa Museum, and finally make a trip to Primorsky Boulevard.

For photos, reviews, and other tourist information, use the Odessa vacation tool.

Doha, Qatar to Odessa is an approximately 10.5-hour flight. You'll gain 1 hour traveling from Doha to Odessa due to the time zone difference. When traveling from Doha in July, plan for colder days and slightly colder nights in Odessa: temperatures range from 32°C by day to 22°C at night. Finish your sightseeing early on the 2nd (Sun) so you can travel to Lviv.
more less

You'll visit kid-friendly attractions like Rynok Square and Old Town. When in Lviv, make a side trip to see Zoopark Limpopo in Medenychi, approximately Medenychi away. Next up on the itinerary: stroll the grounds of Lychakiv Cemetery, make a trip to Chapel of the Boim Family, walk around Stryisky Park, and browse the exhibits of Insomnia - The Haunted House.

Plan my Lviv trip by asking Inpirock to come up with tips and suggestions.

You can fly from Odessa to Lviv in 5.5 hours. Alternatively, you can drive; or take a train. Traveling from Odessa in August, expect Lviv to be a bit cooler, temps between 30°C and 15°C. Finish your sightseeing early on the 5th (Wed) to allow enough time to travel to Kyiv (Kiev).
more less 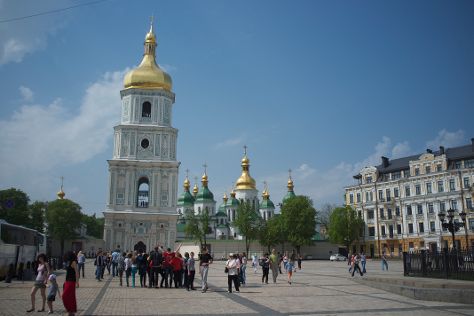 Kids will enjoy St. Sophia's Cathedral and Khreshchatyk. There's much more to do: do sightseeing your way with Private Tours, get in on the family fun at Seiklar Rope Park, take in the architecture and atmosphere at St. Volodymyr's Cathedral, and don't miss a visit to Andriyivski Uzviz.

You can fly from Lviv to Kyiv (Kiev) in 3.5 hours. Alternatively, you can take a train; or drive. In August, plan for daily highs up to 31°C, and evening lows to 18°C. Wrap up your sightseeing by early afternoon on the 9th (Sun) to allow time for travel back home.
more less

Things to do in Kyiv (Kiev)