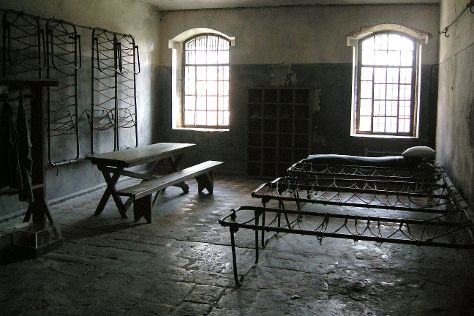 The capital of Lithuania, Vilnius, boasts an impressive medieval quarter--one of the continent's largest and a World Heritage Site with almost 2,000 historical buildings.

You'll discover tucked-away gems like Old Town Kaunas and Ninth Fort. Vilniaus staciatikiu Sventosios Dvasios vienuolynas and Church of St. Casimir will appeal to history buffs. Get out of town with these interesting Vilnius side-trips: Kaunas (Cathedral of St. Peter and St. Paul & Sugihara House). There's still lots to do: contemplate the long history of Ponary cmentarz, examine the collection at Money Museum of the Bank of Lithuania, take a stroll through Vilnius Old Town, and stroll the grounds of Rasu Cemetery (Rasu kapines).

To find more things to do, other places to visit, maps, and more tourist information, use the Vilnius trip itinerary planning app .

London, UK to Vilnius is an approximately 6-hour flight. You can also do a combination of flight and train; or do a combination of car and ferry. Due to the time zone difference, you'll lose 2 hours traveling from London to Vilnius. June in Vilnius sees daily highs of 24°C and lows of 12°C at night. Wrap up your sightseeing on the 18th (Thu) to allow time to drive to Minsk.
more less

Things to do in Vilnius

Kaunas
Find places to stay Jun 15 — 18:
Hotels on TripAdvisor
Homes on Airbnb
Highlights from your plan 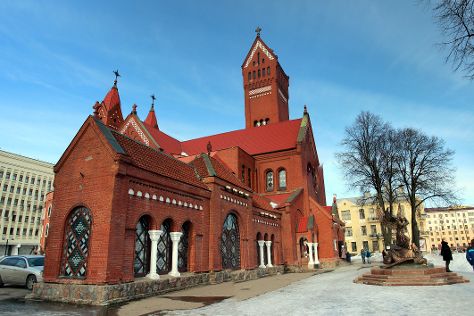 As the capital and largest city of Belarus, Minsk represents a cultural center full of churches, libraries, museums, and theatres.

Start off your visit on the 19th (Fri): take in the spiritual surroundings of Holy Spirit Cathedral, wander the streets of Upper City, pause for some serene contemplation at Church of Saints Simon and Helena, then brush up on your military savvy at Belarusian State Museum of the History of the Great Patriotic War, then pause for some serene contemplation at Archcathedral Holy Name of the Blessed Virgin Mary, and finally soothe aching muscles at some of the top local wellness centers. Here are some ideas for day two: pause for some photo ops at Island of Tears, walk around Victory Park, then admire the masterpieces at The National Art Museum of the Republic of Belarus, then see the interesting displays at Belarusian Folk Museum of Architecture and Rural Life, and finally learn about all things military at The Historical and Cultural Complex Stalin Line.

For more things to do, reviews, photos, and other tourist information, go to the Minsk tour itinerary planning website .

Traveling by car from Vilnius to Minsk takes 2.5 hours. Alternatively, you can take a train; or fly. You'll lose 1 hour traveling from Vilnius to Minsk due to the time zone difference. In June, plan for daily highs up to 26°C, and evening lows to 13°C. Finish your sightseeing early on the 20th (Sat) so you can travel to Kiev.
more less

Things to do in Minsk

The Historical and Cultural Complex Stalin Line
Find places to stay Jun 18 — 20:
Hotels on TripAdvisor
Homes on Airbnb
Highlights from your plan

©
Church of Saints Simon and Helena

To see traveler tips, reviews, more things to do, and tourist information, refer to the Kiev sightseeing planner .

Traveling by combination of bus and flight from Minsk to Kiev takes 3.5 hours. Alternatively, you can do a combination of bus and flight; or drive. The time zone changes from Moscow Standard Time to Eastern European Time, which is usually a -1 hour difference. Traveling from Minsk in June, you can expect nighttime temperatures to be somewhat warmer in Kiev, with lows of 17°C. Wrap up your sightseeing on the 21st (Sun) early enough to travel to Chisinau.
more less

©
Chișinău Etymology and namesThe origin of the city's name is unclear, but in one version, the name comes from the archaic Romanian word chișla (meaning "spring", "source of water") and nouă ("new"), because it was built around a small spring, at the corner of Pușkin and Albișoara streets.The other version, formulated by Ștefan Ciobanu, Romanian historian and academician, holds that the name was formed the same way as the name of Chișineu (alternative spelling: Chișinău) in Western Romania, near the border with Hungary. Kick off your visit on the 22nd (Mon): do a tasting at Milestii Mici, pause for some serene contemplation at The Metropolitan Cathedral “Nativity of the Lord”, then steep yourself in history at Stephen the Great Monument, and finally learn about winemaking at Cricova Winery. On the 23rd (Tue), you'll have a packed day of sightseeing: get outside with Nistru Beach, then enjoy the sand and surf at Goa Territory, then walk around Dendrarium Park, and finally take an in-depth tour of National Museum of Ethnography and Natural History.

For traveler tips, ratings, and tourist information, you can read our Chisinau trip itinerary site .

Traveling by combination of bus and flight from Kiev to Chisinau takes 5 hours. Alternatively, you can drive; or do a combination of flight and train. Finish your sightseeing early on the 23rd (Tue) to allow enough time to travel to Moscow.
more less

Things to do in Chisinau

©
The Metropolitan Cathedral “Nativity of the Lord”

Russia's political, economic, and cultural center, Moscow remains the most populous inland city in the world, famed for its colorful history and rich architectural heritage.

Red Square and Krutitskoe Podvorye are good opportunities to explore the local culture. You'll explore the less-touristy side of things at Cathedral of Christ the Saviour and Gefsimansky Chernigovsky Skit (convent). Change things up with these side-trips from Moscow: Sergiyev Posad (Trinity Cathedral, Cathedral of the Assumption, & more), Muzey tekhniki Vadima Zadorozhnogo (in Arkhangelskoye) and Istra (Monument V Zemlyanke & New Jerusalem Monastery of Resurrection). There's lots more to do: appreciate the extensive heritage of Cathedral Square, take in the architecture and atmosphere at St. Basil's Cathedral, examine the collection at Diamond Fund (Almazny Fond), and steep yourself in history at Kazan Cathedral.

You can fly from Chisinau to Moscow in 5.5 hours. Other options are to drive; or take a bus. You'll lose 1 hour traveling from Chisinau to Moscow due to the time zone difference. Expect a daytime high around 24°C in June, and nighttime lows around 13°C. Finish up your sightseeing early on the 26th (Fri) so you can travel back home.
more less

Things to do in Moscow

©
Church of The Holy Virgin