Step out of Kiev with an excursion to Sergiy Korolyov Astronautics Museum in Zhytomyr--about 1h 45 min away. There's much more to do: take in the spiritual surroundings of Kyivo-Pechers'ka Lavra, appreciate the history behind Rodina Mat (Motherland), pause for some serene contemplation at Saint Sophia Cathedral, and don't miss a visit to Maidan Nezalezhnosti (Independence Square).

Ankara, Turkey to Kiev is an approximately 6-hour combination of bus and flight. You can also do a combination of bus, flight, and shuttle; or drive. The time zone difference moving from Eastern European Time to Eastern European Time is minus 1 hour. Prepare for a bit cooler weather when traveling from Ankara in January: high temperatures in Kiev hover around -1°C and lows are around -7°C. Finish up your sightseeing early on the 19th (Sun) so you can travel to Odessa.
more less

Start off your visit on the 19th (Sun): pause for some photo ops at Statue of the Duc de Richelieu, make a trip to Primorsky Boulevard, make a trip to Teatralnaya Square, test your problem-solving skills at popular escape rooms, then see the interesting displays at Secrets of Underground Odessa Museum, and finally stroll around City Garden. On the 20th (Mon), you'll have a packed day of sightseeing: make a trip to Monument to L. Utesov, contemplate the waterfront views at The Odessa Port, observe the fascinating underwater world at Nemo Odessa Dolphinarium, then have some family-friendly fun at Anvio VR, then see the interesting displays at Museum of Interesting Science, and finally appreciate the history behind Monument to the 12th Chair.

To find photos, where to stay, maps, and more tourist information, refer to the Odessa day trip app .

Fly from Kiev to Odessa in 3 hours. Alternatively, you can do a combination of shuttle and flight; or drive. Traveling from Kiev in January, expect nights in Odessa to be about the same, around -5°C, while days are somewhat warmer, around 1°C. On the 21st (Tue), wrap the sightseeing up by early afternoon so you can drive to Kamianets-Podilskyi.
more less 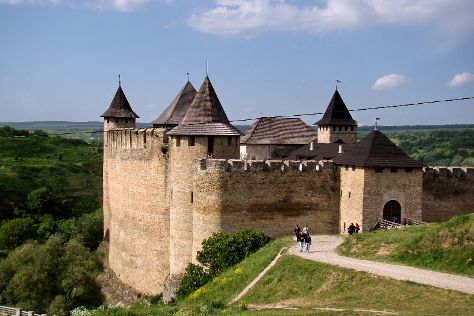 ©
Kamianets-Podilskyi is a city on the Smotrych River in western Ukraine, to the north-east of Chernivtsi. You'll find plenty of places to visit near Kamianets-Podilskyi: Khotyn (Khotyn Fortress & Khotyn Historic Museum) and Crystal Cave at Kryvche (in Kryvche). Next up on the itinerary: explore the ancient world of Kamenet's Podolsky Castle, don't miss a visit to The Russian Gate With Fortifications, examine the collection at Museum of Miniatures Castles of Ukraine, and take in the architecture and atmosphere at Cathedral of the Saints Peter and Paul.

To find reviews, maps, other places to visit, and other tourist information, refer to the Kamianets-Podilskyi day trip planning site .

Things to do in Kamianets-Podilskyi

Khotyn, Crystal Cave at Kryvche
Find places to stay Jan 21 — 24:
Hotels on TripAdvisor
Homes on Airbnb
Highlights from your plan

©
Cathedral of the Saints Peter and Paul

©
Chernivtsi is a city in western Ukraine, situated on the upper course of the River Prut. Get ready for a full day of sightseeing on the 25th (Sat): admire the striking features of Palace of Culture - Jewish People’s House, get a sense of history and politics at Chernivtsi City Hall, make a trip to Teatralna Square, then make a trip to Alley of Stars, then admire the landmark architecture of Chernivtsi Train Station, and finally make a trip to Turkish Well.

Getting from Kamianets-Podilskyi to Chernivtsi by bus takes about 2 hours. Other options: drive; or take a train. In January, daytime highs in Chernivtsi are 0°C, while nighttime lows are -6°C. Wrap up your sightseeing on the 26th (Sun) early enough to drive to Yaremche.
more less

Things to do in Chernivtsi

©
Church of the Heart of Jesus 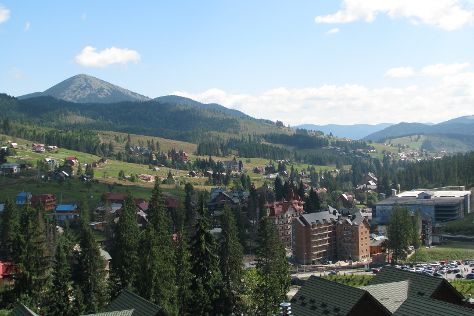 ©
Yaremche is a city in Ivano-Frankivsk Oblast of west Ukraine. Kick off your visit on the 27th (Mon): take in the architecture and atmosphere at St Elias Wooden Church, take in the awesome beauty at Makovytsia Mountain, then take your sightseeing to a higher altitude at Mount Bukovel, then have some family-friendly fun at Entertainment Center Buka, and finally take your sightseeing to a higher altitude at Hoverla. Get ready for a full day of sightseeing on the 28th (Tue): explore the striking landscape at Rocks Dovbusha, admire the sheer force of Probiy Waterfall, examine the collection at Park-Museum of the Carpathians in Miniature, take in the architecture and atmosphere at Nativity of St. John the Baptist, then indulge your thirst for a good beer at Girske Mini-Brewery, and finally take in the spiritual surroundings of Church of Nativity of Most Holy Mother of God.

To see maps, more things to do, ratings, and other tourist information, go to the Yaremche vacation tool .

Getting from Chernivtsi to Yaremche by car takes about 2.5 hours. Other options: take a train; or take a bus. January in Yaremche sees daily highs of 0°C and lows of -8°C at night. Finish your sightseeing early on the 28th (Tue) so you can drive to Lviv.
more less

Bukovel
Find places to stay Jan 26 — 28:
Hotels on TripAdvisor
Homes on Airbnb
Highlights from your plan

Lviv is known for historic sites, museums, nightlife, parks, and fun & games. Your plan includes some of its best attractions: don't miss a visit to Rynok Square, take in the spiritual surroundings of Armenian Virgin Mary's Dormition Church, take in the architecture and atmosphere at Svyatogo Yura Cathedral, and explore the different monuments and memorials at Lychakiv Cemetery.

To find reviews, more things to do, other places to visit, and tourist information, you can read our Lviv day trip tool .

You can drive from Yaremche to Lviv in 3.5 hours. Other options are to take a train; or take a bus. Expect a daytime high around 0°C in January, and nighttime lows around -7°C. Finish your sightseeing early on the 31st (Fri) to allow enough time to travel to Kharkiv.
more less 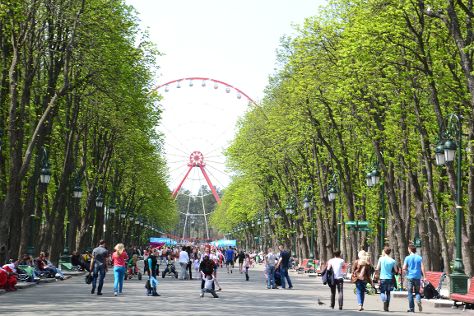 Kharkiv is known for parks, nightlife, historic sites, museums, and fun & games. Your plan includes some of its best attractions: walk around Gorky Central Park of Culture and Leisure, ponder the design of Mirror Stream fountain, test your team's savvy at popular escape rooms, and make a trip to Kharkiv Municipal Gallery.

To see traveler tips, more things to do, photos, and other tourist information, use the Kharkiv trip planner .

Traveling by flight from Lviv to Kharkiv takes 6 hours. Alternatively, you can do a combination of train and flight; or drive. While traveling from Lviv, expect slightly colder days and about the same nights in Kharkiv, ranging from highs of -3°C to lows of -9°C. You'll have a few hours on the 4th (Tue) to wrap things up before traveling to Chernobyl.
more less

©
Chernobyl or Chornobyl is a city in the restricted Chernobyl Exclusion Zone situated in the Ivankiv Raion of northern Kiev Oblast, near Ukraine's border with Belarus. Here are some ideas for day two: contemplate in the serene atmosphere at St. Elijah Church, admire the landmark architecture of Chernobyl Go, then don't miss a visit to Reactor No 4, then get in on the family fun at Pripyat Amusement Park, and finally expand your understanding of the military at Duga Radar Russian Woodpecker.

To find photos, ratings, more things to do, and other tourist information, use the Chernobyl trip itinerary app .

Traveling by combination of flight, bus, and taxi from Kharkiv to Chernobyl takes 8.5 hours. Alternatively, you can do a combination of train and taxi; or drive. Expect a daytime high around 0°C in February, and nighttime lows around -6°C. You'll set off for home on the 6th (Thu).
more less

Things to do in Chernobyl